29 May , 2017  |
A recent article from ABC Radio Darwin about the plastic bag ban stated:
“Northern Territory environmental groups have claimed the Government’s legislation banning plastic bags has failed in its intent to reduce unwanted litter.

Laws prohibiting single-use plastic bags less than 35 microns in thickness was introduced to the Territory in September 2011. 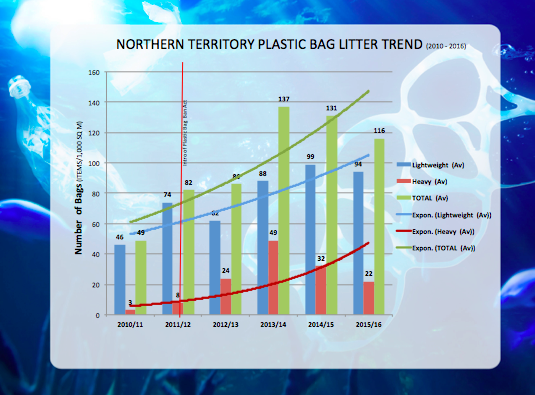 As you can see in this graph from the 2016 Litter Count report, there is an increasing trend of plastic bags in the NT.

So what is the solution?

As Heimo mentioned, ” while surveys showed most plastic bag litter was found on roadsides and in car parks, they were unable to determine who was ditching them.

“Whether the bags are just being thrown on the ground or they’re being removed from bins and landfill by animals or wind, we’re not sure.

“The issue really is that the Government has introduced an act in writing, when it’s the people that we need to act.

“It’s education that we need; we need people to be aware that a 15-minute use of a plastic bag that then lasts 10 years above ground, maybe thousands of years below ground, is just unacceptable.”

Glen Evans, project manager at the NT Environment Centre, said he had no reason to doubt the findings of Keep Australia Beautiful’s litter surveys.

But he said a lack of independent data both before and after the ban was implemented made it difficult to assess its efficacy.

“Personally, when I go into supermarkets I’ve definitely noticed an increase in the trend of people using reusable plastic bags,” he said.

“Initially the impact was that people didn’t want to pay [for reusable bags], but over time their behaviour has changed.”

Mr Evans agreed with Mr Schober’s stance that it was society’s attitude towards plastic bags that needed to change, rather than legislation.

“All around the world we’re seeing the impacts of plastic in our waterways and oceans,” he said.

“It’s not just thinking about recycling a product but looking at other ways we can minimise the amount of plastic bags that are being used.”

‘Queensland ban an opportunity to reflect’

Lauren Moss, the Minister for Environment and Natural Resources, said a 2014 review of the ban showed it had reduced the number of bags being sold or given away by more than 10 million units.

“Legislation is only one part of this. I think the community education and making sure we are really encouraging people to use those [reusable] bags more is really important,” she said.