The proud MacDonnell Regional township of Finke (Aputula) has won the 2017 Northern Territory Tidiest Town accolade at the Awards Night held in October 2017 in Alice Springs.

“The residents living in the harsh beautiful arid Simpson Desert region have embraced the Territory Tidy Towns program, with many in the community working together in corporation and collaboration to achieve this prestigious Award,” Mr Schober said.

“The MacDonnell Council Staff, Traditional Owners and the residents of Finke all deserve this win for their efforts and dedication to ensure their community is the Territory’s Tidiest Town over the past 12 months.

The township of Finke demonstrated great community pride and leadership in local sustainability practices and education, and set a wonderful example for other remote townships to follow.

“I congratulate the MacDonnell Regional Council for their support inspiring Finke to win this Award,” Mr Schober added.

As the Territory’s 2017 Tidiest Town, the desert community of Finke (Aputula) will represent the Northern Territory at the Keep Australia Beautiful, Australian Tidy Towns Awards in South Australia next year.

The Territory Tidy Towns Awards program recognises and acknowledges the commitment and hard work undertaken by remote and regional community groups, schools, individuals, businesses and Councils. It showcases innovative ideas and initiatives that improve social and environmental development and sustainability in regional areas of the Northern Territory. 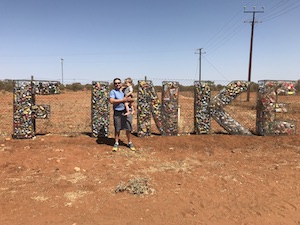