A day in the life of a Tidy Town – Aputula (Finke)

“The Finke people feel the same way about alcohol as they do about heroin,” a Council worker tells me. “That’s how much they dislike it.”

Finke is a small town of around 160 people, the majority of them Aboriginals and the rest whites who work there in some official capacity.
It’s a peaceful little place about 220kms from Alice Springs with well-maintained houses and neat yards.

The desert sun beats upon the red earth and the pace is slow. Very slow.

The long, winding river from which the town gets its name rarely flows and water to sustain the locals is pumped into a huge tank from three bores.
I am here for the judging of the national Tidy Towns final. Finke, or Aputula as it is known in local language, has won the 2017 NT Tidy Town award and this has pushed them through to the national final.
Finke last won the Territory finals in 1998. Our small team, McDonnell Regional Council CEO Jeff MacLeod, National Tidy towns judge Gail Langley, her hubby Richard and myself, flew in on a small Northern Territory Air Services Piper Navajo from Alice.

This was our third attempt as the previous weekend an unseasonal downpour grounded the plane on both the Friday and Saturday.

It brought to mind the time I was stranded for a week in a remote mountain plateau village in the New Guinea Highlands. The pilot of the plane announced he would not come back until the locals had fixed the potholes littering the grass strip. It was far too dangerous to attempt a return landing, he said.
I was stuck in the mountain village and told if I really needed to get to the nearest town with an air-strip I could walk for two days through the jungle on a rugged bush track,then try and find a canoe or a trip down the river or another day. In the end, after about a week of waiting, a helicopter came to rescue me. But that’s another story.
We took off from Alice on the Friday morning, not a cloud to be seen, and landed 45 minutes later at the Finke airstrip – no potholes, I noted – and were met by Council Communications Co-ordinator Darren Pfitzner with other members of his Council team. They had driven the 200-odd kilometres from Alice the previous day to ensure things were in order for the arrival of the guests.

“It’s sunny 360 days of the year here. You picked the only weekend with rain,” they say apologetically.

For this small community the Tidy Towns competition is a big deal and Gail is being treated accordingly.

We meet Sam and Geoff from the Council then pile into a couple of utes and head towards town. As we leave the fenced airstrip we drive past a dried up vineyard, the desert sands clawing back the blackened vines.

A discussion begins about this vineyard. Someone suggests it was probably developed by a well-meaning government worker who had flown in and thought grapes would be a good money earner for the community.

It is agreed that many such projects are to be found around the Territory. An enthusiastic government worker drops in, full of energy, bright ideas and taxpayer’s cash. The project lasts until the initial rush of enthusiasm fades and then it dies out. 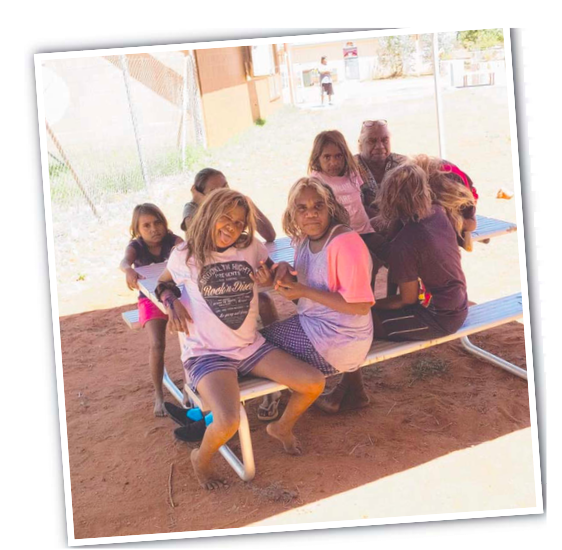 The community is left with nothing more than a story to tell about parachute aid – projects designed in the big city and dropped in without too much thought about how useful they will be when they hit the ground.

We arrive in town after a short drive and Darren points out the local store which has two pumps selling petrol at $2.10 a litre. By comparison, petrol in Alice is around $1.55.

There’s a few people around, going about their business quietly and with only a brief curious look at the white visitors.

I’m told that the locals have ensured that Finke, an alcohol- free town, is too boring for the troublemakers, the bad drinkers – so, in search of action they head to Alice where they can get drunk and create work for the town coppers.

Alcohol does occasionally find its way into Finke, though. I’m told there was a bit of a party the previous night but no damage done.

I also notice a polite sign on the door of the store telling the idiots (my description) who caused some property damage a while ago to do the right thing by owning up and making amends.

There are no police in Aputula but, from what I can gather, they are not needed – at least not as a full-time presence.

Instead, the Council operates a night patrol after dark if there are any issues to be sorted. The Patrol does not have power to arrest.

“Their job is to try and keep people out of the judicial system, early intervention,” we are told.

As you would expect, there is no rubbish in the streets of Finke today. After all the town is being judged.

I do, however, notice the occasional pile of dried horse manure, but am assured this will not count against the town. I ask Darren about the source of the dung. It’s the wild brum- bies, he explains.

A bit later I see a small herd of them, muscled and shiny,galloping playfully on the fringes of town and, for a moment, feel slightly envious.

We are shown into the administration building to be given cake, biscuits and coffee.

In the office is a small Centrelink counter – there’s not a lot of paid work available in Finke. Jeff says “maybe two in 10 have a job” – and next door is a kitchen which feeds the older town inhabitants. It’s kind of a meals-on-wheels deal. There are three elderly ladies at a table, smiling shyly as they eat breakfast cereal.

“This is the place to be on a hot day,” he smiles.

In the next building is the childcare centre where a group of small Aboriginal children. I see a bunchy of them, muscled and shiny, galloping playfully on the fringes of town are playing with toys. Among them is a lively white boy named Lachlan.

He is blonde, shirtless and wears a rope of beads around his neck. Lachlan’s parents work for the Council.

“He can speak Pitjantjara,” Darren tells me. “But his parents don’t understand it.”

I comment that she is a long way from the islands and she grins, “I like the desert”.

There used to be a pub in town and the building still stands. Plans are underway to turn it into a historical museum. And Finke has an interesting history.

“You’ll notice there are no old growth trees around here,” says Jeff.

That’s because Finke was originally developed as a railway siding on the original Ghan railway track for the train to stop and refuel. And for steam engines this meant firewood and water.

Jeff, whose knowledge of local history is impressive, says the old journey from Oodnadatta in South Australia to Alice via Finke “could take two days, two weeks or two months”, depending on the weather and flooding.

He smiles when he says this so could be enjoying a small exaggeration at our expense.

But there is no way of knowing as the mobile signal doesn’t reach Finke and a quick internet fact-check is out of the question.

“Hopefully in the next six months we’ll have mobile coverage here,” he says, adding that the Council is planning for the service and “we’ve got dates”.

Jeff tells us that when travelling on the original track, the train’s crew would always bring a rifle to shoot ’roos for food if the train was delayed. Again, that smile.

When the white folk first moved to Finke, tribespeople from outlying areas soon appeared. They made camps on the surrounding sand dunes, trading dingo skins and artefacts for Western goods.

The town later boomed when the government moved the cattle yards there from Rumbalara. A racetrack was built, as was the pub, an airstrip for the Flying Doctors and a school. The strip and school remain and we are shown into the classroom where students are learning the story of Ali Baba.

I remember learning the same story as a child a long time ago. The classics never die.

We walk towards the old pub where I am introduced to Darren Darts and his wife, Sian, who are there to help out the Aputula Aboriginal Corporation. They are a young white couple from the big city and Sian is expecting a child.

Darren tells me they often drive out to the dry river bed to soak up the desert’s healing solitude and enjoy a silence which few places other than this remote red landscape can provide.

Darren has helped the locals open a small art gallery on the pub premises and is the driving force behind the proposed museum.

Intense, raw energy surges from this young man and as he describes his plans for attracting tourists to town his eyes never let mine go.

I leave Darren and take a stroll up the street where I meet up with the Council guys. to chat about Aboriginal art.

They reckon they prefer the local artwork to that produced in Alice and the big cities because their artists are “more emotionally involved.

“The further from the bitumen, the better the art is.”

And Finke has been pretty far from the bitumen since the original railway line was replaced in the late ’70s by one which bypassed the town.

All the railway workers took off, leaving only the Abo- riginals who had settled in the surrounding dunes.

But instead of deserting the town, they moved in, naming it Aputula, meaning “water”.

“The railway closing was a major economic setback,” says Jeff, “If this had been a country town in Victoria, New South Wales, the town would have closed down. Australia is full of those little towns that are all abandoned now. And it says a lot that the Finke people didn’t allow Finke to die. And it’s really their place, they run it.”

After the whites left, the local Aboriginal council bought the pub just so they could close it down.

Jeff says that before the pub was decommissioned the local health worker moonlighted as the barman. This meant he knew who was medically unfit to drink – kidney diseases and such – and would refuse to serve them.

Alcohol makes its way into town these days once a year for the annual Finke Desert Race from Alice. While the event has put the town on the map the economic benefits are few – the town swells to around 3000 but most people bring all they need for the two days in Finke.

All they leave behind is some litter for the townsfolk to clean up and not a lot of dollars in the local till.

“There’s infrastructure in the community that is not used anymore that for a relatively low cost can be converted to tourism-type businesses,” he says, adding there are plenty of city folk, grey nomads, who would enjoy the town’s hospitality.

“Retirees, the Baby Boomers, they’re all cashed up. They’re buying the $100,000 Toyota and the big off-road caravan and they’re off and racing to see the country.”

And Finke is a good pit stop for such travellers. It’s quiet, scenic and peaceful – a nice place to visit.

This is also the opinion of Gail and Richard who are clearly impressed with the town and its friendly people. Just how impressed they are will be seen when the winner of the national Tidy Towns competition is announced in April.

This article appeared in the Centralian Advocate, Alice Springs NT and is written by David Lornie.